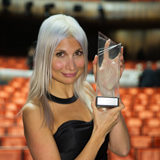 Selina Juul, Founder of the Stop Wasting Food movement in Denmark, grew up in Russia before she moved to Denmark at the age of 13. She works as Lecturer and Graphic Designer.

She launched the non-profit organization “Stop Wasting Food” in 2008. Since then, it became Denmark’s largest consumer movement against food waste, which had a huge national and international media impact and results.

Stop Wasting Food movement collaborates with EU and UN initiatives and Selina Juul won many prices for her insatiable commitment against food waste, among them Nordic Council Nature and Environment Prize 2013 and the Svend Auken Prize 2013, which was presented to her by the Danish Prime Minister Helle Thorning-Schmidt. She is also a Recipient of Cross of Merit Pro Utilitate Hominum of Sovereign Order of Saint John of Jerusalem, Knights Hospitaller.

1. Which aspect of the food waste problem is the most relevant?

You have the power! The power of ordinary consumers is extraordinary.  As a consumer, you can create a great impact in preventing food waste by small simple actions. By doing so, you reduce your CO2 emissions and save your money and time: it's a win-win situation. Be a wise consumer and start planning, doing shopping lists, cooking leftovers, sharing food with your neighbours. Buy and order only what you actually need - and use what you have bought.

Food waste is a global tragedy on the face of humanity: FAO estimates that the global food waste can feed every starving child, man, and woman in the world - three times over! We need to fight food losses and food waste - and throughout the entire food value chain: the food industry, the agriculture, the industry, the foodservice, the retailers and ourselves - the consumers. It's time to end pointing fingers at someone else, than rather admitting that we are all a part of the problem – and thus we are a part of the solution. It’s time to be united against food waste. As long as we the people blame the food industry, we take the responsibility off our own shoulders. It’s time to change this mindset - because we are all in this together.

3. Do you know SAVE FOOD intitiative already and which role does the Initiative SAVE FOOD play in fighting food losses and food waste in your opinion?

SAVE FOOD intitiative is one of the most important and fundamental intitiatives in fighting the food losses and waste. I am proud to be a part of the SAVE FOOD intitiative. By uniting the entire food value chain, the problem is addressed from all angles. Cutting the food losses and waste means saving money for the businesses - an opportunity like this cannot go wasted, especially in light of the still present economical crisis. With positive examples and best practices throughout the entire food value chain, we can end the global food waste scandal.