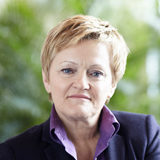 Renate Künast was born 15 December 1955 in Recklinghausen, North Rhine-Westphalia. She received a degree in social work from the University of Applied Sciences in Düsseldorf. From 1977 to 1979, she worked as a social worker at the prison in Berlin-Tegel. She went on to study law, graduating in 1985 by passing the Second State Examination. She’s been a lawyer ever since.

In 1979, she joined the West Berlin Alternative List – a forerunner of the Green Party – and has worked for the party in a variety of functions. During the Red-Green coalition state government in Berlin in 1989/90, she served as chair of her party’s parliamentary group.

After the end of the Red-Green administration, she continued her work as a member of parliament for Alliance 90/The Greens – as chair until 1993 and from 1998 to 2000 and as legal-policy spokeswoman in the interim. From June 2000 to March 2001, Renate Künast served as chairwoman of Alliance 90/The Greens on the national level.

From January 2001 to 4 October 2005, she held the position of federal minister for Consumer Protection, Food and Agriculture. From October 2005 to October 2013, she served as chairwomen of Alliance 90/The Greens in the federal parliament, the German Bundestag, where she’s been holding the position of chairwoman of the Committee on Legal Affairs and Consumer Protection since February 2014.