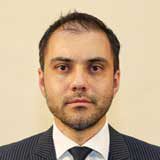 Mr. Naysán Sahba, was appointed as Director of UNEP's Division of Communications and Public Information in January 2014.  Throughout the 17 years of his professional career, which includes assignments with WHO and UNICEF in Africa and Asia, Mr. Sahba has been engaged in significant communication, advocacy, partnership and participation programmes in a wide range of domains related to sustainable development, such as health, education, climate change and disaster risk reduction.

From 2009 to 2013, he served as UNICEF's Chief of Communication, Advocacy, Partnerships and Participation in Mozambique. where he was responsible for public and media relations and communication for development activities.

Prior, Mr. Sahba worked in  India with the Global Polio Eradication Initiative, supporting communication for immunization interventions in the state of Uttar Pradesh – one of the final frontiers in India's successful fight against wild poliovirus. In 2005 he transferred to UNICEF India’s Delhi office from where he spearheaded UNICEF’s entertainment-education programmes. One of his noted achievements is the conceptualization of a primetime TV serial tackling hard-hitting issues effecting women and children that was made accessible to 400 million Indian households including 41 million under-privileged women aged 15-35, the positive impact on many of whose lives has been measured and documented.

1. Which aspect of the food loss and waste problem is the most relevant for you?

The most poignant fact is that, in a world where some 842 million people are undernourished,  we continue to lose or waste one-third of all the food we produce. We also waste other precious resources - such as agricultural land and water - through food loss and waste. For example, it is estimated that a kilogram of rice not consumed represents the waste of between 1000 and 3000 litres of water used for its production.

2. What should be done to reverse these trends?

Education and awareness-raising with a view towards individual behavioural change are perhaps the most simple and effective means to address the problem of food loss and waste. New guidance documents, including one soon to be released by UNEP and partners, can also help local authorities and businesses to put in place food waste prevention and reduction strategies.

3. What role does the SAVE FOOD Initiative play in fighting food loss and food waste?

The Save Food Initiative and many of its partners, such as the Think.Eat.Save.campaign,  help to raise awareness and highlight both the challenges and solutions to the issue of food waste. In particular, the initiative brings together various stakeholders from NGOs, UN organizations, individuals, the hospitality industry, and the food production, distribution and packaging industries to raise awareness of the staggering loss and waste of food that occurs from fields to dinner tables around the world, as well as to come up with solutions to the problem.