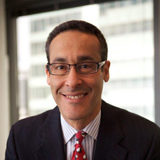 Jeffrey D. Klein has been President and CEO of The Global FoodBanking Network (GFN) since January 2011. GFN is a global non-profit organization dedicated to alleviating world hunger by creating, supplying, and strengthening food banks and food bank networks around the world, in countries outside the US.

Klein is a sought-after expert on issues pertaining to food rescue and alleviating hunger through food banking. He recently presented information on “Food Reuse and Recovery” at a think tank meeting of the Organization for Economic Cooperation and Development (OECD) Food Chain Analysis Network, and was a content advisory board member and panelist at The Economist “Feeding the World” Conference Asia-specific Summit. Klein also presented at The Norman E. Borlaug International Symposium (2012), part of the World Food Prize, an annual event addressing cutting-edge issues in food security and nutrition. Prior to joining GFN, Klein spent three decades financing, investing in and selling private and public companies in the United States, Latin America and Asia.

In the food industry, his work included everything from investments and board membership, to business advising, and raising capital for grocery companies in the United States and Brazil. Klein also was a senior banker with Citibank and Mellon Bank. Klein currently serves on the board of Barri Financial Group and as an advisor to grocery retailer and distributor Progreso, LLC, both of which focus on Hispanic consumers in the United States. Previous board positions include McCormick & Schmick’s Seafood Restaurants, Inc., and Chart House Enterprises.

1. Which aspect of the food waste problem is the most relevant?

I am shocked at the magnitude of the problem especially since it is so avoidable and unacceptable. The life blood of food banks is capturing surplus before it becomes food waste and use it to feed hungry people.

The increased focus that is taking place on this critical issue is helping to eliminate waste all along the supply chain. Political fortitude will become increasingly necessary as important societal tradeoffs will need to be made (a great example would be adopting Good Samaritan protection for donors in all countries).

3. Do you know SAVE FOOD intitiative already and which role does the Initiative SAVE FOOD play in fighting food losses and food waste in your opinion?

Food banks have been leaders in addressing food waste since their formation in the 1960’s. GFN became a formal member of SAVE FOOD in early 2013 and gatherings such as this are valuable so long as talk leads to tangible action “on the ground.”