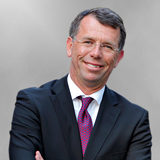 Christian Traumann joined MULTIVAC Sepp Haggenmüller GmbH & Co. KG in 2002, serving as authorised representative and CFO before taking over as managing director in April 2008. After his school years, spent mostly at international schools in Sweden, Angola, Nigeria and Iran, his training to become a hotel manager brought him to the Hotel Vier Jahreszeiten Kempinski in Munich.

Thereafter, he worked as an airport ramp shift supervisor for Lufthansa Service Gesellschaft (LSG) Munich while simultaneously pursuing a business degree with a concentration in tax, trust, auditing and controlling services in Munich. Upon graduating, Traumann served as the head of auditing for the company BTP, Prüfung, Beratung Treuhand, Wirtschaftsprüfungsgesellschaft mbH, Munich, formerly BTR.

In 1998, he switched over to Transtechnik GmbH in Holzkirchen, where he held the position of commercial director and authorised representative. He joined MULTIVAC in 2002.

1. Which aspect of the food waste problem is the most relevant for you?

If we’re successful in stopping food waste on a global level, not one person in the world would have to starve today.

One aspect is information and education; another is making available adequate technology for breeding, harvesting, storage, packaging and logistics.

Our main task is the dissemination of information and knowledge in order to highlight the opportunities that already exist today for getting the global food loss situation under control.