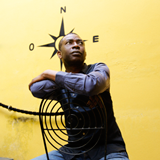 The Senegalese musician and Grammy winner is considered Africa’s most famous voice. His songs – including “7 Seconds,” the duet he recorded with Swedish singer Neneh Cherry in 1994 – helped his style of world music achieve a global breakthrough. Since 2000, Youssou N’Dour has served as Goodwill Ambassador for the Food and Agriculture Organisation of the United Nations (FAO), the co-host of the international SAVE FOOD Congress to combat food losses.

At home, Youssou is a powerful cultural icon actively engaged in social issues. He had supported Nelson Mandela long before Mandela’s release from prison, dedicating a song to the anti-apartheid fighter in 1986. In 1988, he performed at the global “Amnesty International Human Rights Now!” tour. He’s worked with the United Nations, UNICEF and the International Red Cross, and he’s been involved in UN campaigns against landmines. He supports the FAO through public calls for action and by appearing on television as an expert on the food security issue. He launched Project Joko to open Internet cafés in Africa and connect Senegalese communities around the world. In 2012, he was appointed Senegal’s Minister of Culture and Tourism, and he’s currently running for mayor of Dakar.

Youssou N’Dour is credited with developing Senegal’s contemporary style of pop music and is considered one of the most influential and successful artists of Africa. Riding the world music wave of the late 1990s, he was able to gain a foothold in Western markets and pave the way for collaborations with Ryuichi Sakamoto, Peter Gabriel and Wyclef Jean, among others. On 2 July 2005, he performed at the Live 8 concerts in London and Paris.